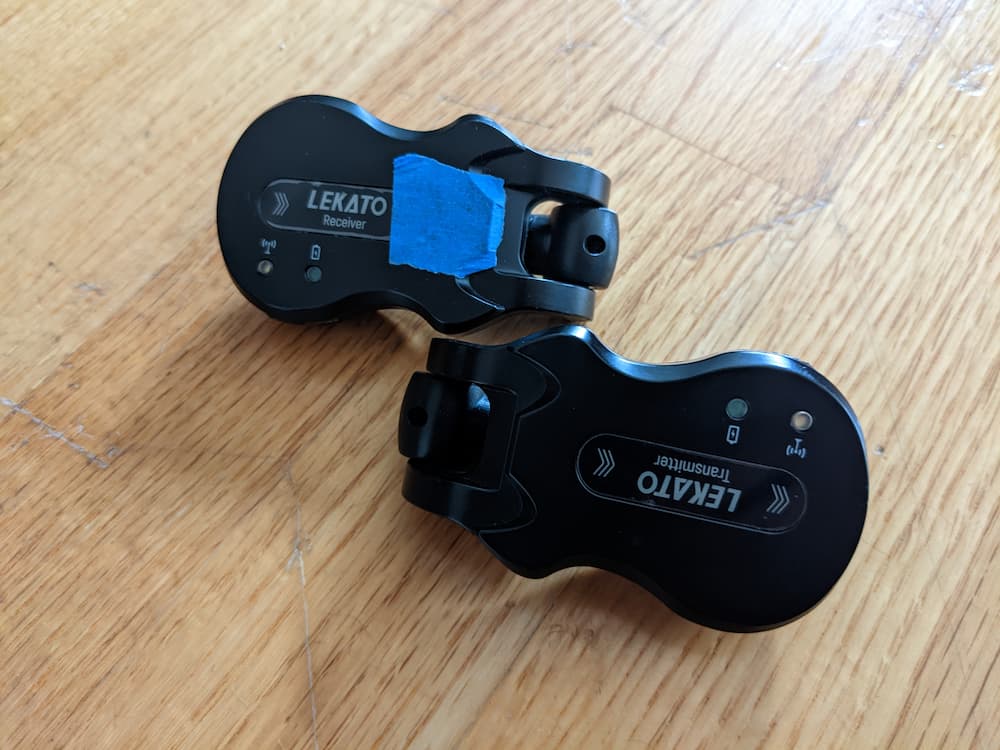 A question I have found myself asking: “do I, generally low-key jazz guitarist, need a wireless guitar system?” My reply to self was often, “No! Of course not! Those are like for rock guys who jump around and stuff”. That’s not exactly my vibe.

But my curiosity about these gizmos was revitalized when I noticed that they were starting to hit the market for very cheap… like as low as $40 cheap. And what’s more: they are no longer this clumsy, VCR-sized receiver appliance paired with a belt-clipped transmitter box that I remember folks rocking in the late ’90s. Now they are a pair of internal-lipo-battery-powered devices that plug directly in to your amp and guitar. And they’re pretty small–I’ve seen objects dangling from ears that are bigger.

While I’m not jumping around arena stages, I do find myself in very awkward cable situations. I manage a weekly jam session and find myself on my feet shuffling around a lot to rotate musical guests in. It only takes a couple of guitarist sit ins and the floor becomes cable spaghetti. I also sit when I play, and when I get up I have done my fair share of cable stomping, resulting in awful electronic pops at best and busted cables/output jacks at worst.

In the past few years, I’ve seen a couple of acoustic jazz musicians start to show up with these wireless things and sing their praises and I figured it was time (shout out to Duo Gadjo, Alex Fernandez and Jess King). For $50, why not? Some guitar cables cost more than that.

There’s a wide range of these things on Amazon from various Chinese companies with prerequisite nonsense names like “Flamma”, “Getaria”, and “Masingo”. Makes me wonder if they name them by throwing darts at a wall of phonetic sounds.

The various options that might be confusing at first, but the real things to look for are which frequency band they transmit on. There’s three classes of these: 2.4ghz, 5.8ghz, and UHF.

While cheaper overall, 2.4ghz is the same range that wifi broadcasts on, so it’s more likely to get signal interference. I’d stick to the latter two types: 5.8ghz or UHF. But I do know people with 2.4ghz units with no complaints at all, so your mileage may vary.

I ultimately ended up with the 5.8ghz Lekato model (affiliate link). It didn’t exhibit the noise gating*, and I haven’t noticed any issues in terms of connection and interference right out of the box. Sound wise, I can’t detect much of a difference A/Bing these with physical cables. They last about 5 hours on a charge, which is enough for a couple of gigs at least.

It’s been several months with these things and I still use them. Some unexpected benefits:

One thing with these is that it’s really hard to tell between the receiver (plugs into the amp) and the transmitter (plugs into the guitar). They look identical, save some tiny text on the front. My “stick a piece of blue tape on it” life hack fixed that problem right quick.

Some other issues I have with it, which are mostly not the fault of the device itself, but good to know:

*Warning: the first one I bought (on recommendation) was the UHF-based Swiff WS-50. I don’t know if all UHF units do this, but it turned out to cut the volume significantly, and have a horrible noise-cancelling / noise gate effect which absolutely destroying the sustain and dynamics of my instrument. I’m honestly shocked any musician would want to use it and I sent it back immediately. So avoid that one, and be sure to read the bad reviews specifically to see what folks are complaining about.

Update: another colleague rushed to the defense of the WS-50 and said his does not exhibit this problem. It’s possible I got a lemon or they addressed the issue in later revisions.

6 thoughts on “Wireless guitar systems: cooler than I thought!”